1. Does the GTS/SR5 differential have the same size of oil pinion seal??

2. Is it possible to remove and replace the oil pinion seal without any problems to the differential settings......??? ex. backlash, spacer, crush sleeve, pinion nut.....

The last time I looked at the FSM, you don't have to actually disassemble anything regarding the pumpkin, just might have to drop it.. But don't quote me on that.

Changing just that oil seal is a pain in the ass. There is a LOT of labor to do before you can even get to it. If I can find the excerpt from the FSM I'll screen shot and post it here (unless someone else does)

I would consider doing other things at that point, maybe even rebuilding the diff.
Success guardian... Successsssssss..
Top

Starts at "RA-4" in the FSM. You'll have to make sure you have everything else that you need to replace when getting to/replacing that oil seal.I read through the step-by-step and it's not too horrible, but like I said you'll need a bearing press, and I don't know what the hell an "oil bath" is, but you need to do something with that inner bearing prior to install.

Thank you for the response CloudStrife, but that illustration is for the axles. I was referring to the ring and Pinion oil seal where the driveline connects to the rear differential.....

Ohhh my bad, haha. Good luck man, I'm not sure on that. Never messed with a diff before..
Success guardian... Successsssssss..
Top

El Gato Felix wrote:1. Does the GTS/SR5 differential have the same size of oil pinion seal??

2. Is it possible to remove and replace the oil pinion seal without any problems to the differential settings......??? ex. backlash, spacer, crush sleeve, pinion nut.....

1. I'm 95% positive the front pinion seal is interchangeable on both the LSD/non-LSD and GTS/SR5 rear ends.
Here is the part number I came up with: 90311-38015. It changes a few times but its all the same thing.

I accidentally locked myself out of the parts-lookup database I use at my work so I used our online website:
https://parts.greenstoyotaoflexington.com/p/Toyota_1985_Corolla-CP-GTS-16L-MT/SEAL---OIL-FOR-REAR-DIFFERENTIAL-CARRIER/63200906/9031138015.html

I'll have to double check when I get on my work computer next week to verify this.


2. I've never physically replaced the pinion seal on an ae86 but im pretty sure all you have to do is disconnect the driveshaft and companion flange from the rear diff and you're set. Other than making sure the bearing is properly seated, you shouldn't have to make any other adjustments.
[I have no idea what I'm doing]
_____________________
instagram: @dacobjurbin
Top

The pinion nut torque is critical and it does not have a specific number. Probably the best way to approach this would be to index the nut (with a mark on the pinion) and then count the turns of the nut as you undo it. Replace the seal and then do the nut up exactly as it came off. Expect the pinion nut to be tight but a simple tool can be made to hold the drive flange while it is loosened, essentially the tool is a long bar with two bolts screwed into it.
Top

The following is how to remove the pinion seal of the rear diferential, on-car, without removing
the 3rd member. The correct procedure for doing this is to totally remove and disassmeble the rear
end, but this is a quick way to cheat the book and replace the seal in about 30 minutes or less. No
b!tching like "well my friend's uncle's brother has been working on Fords for 20yrs and youre doing
it wrong"....I don't care, have him fix your pinion then lol.

Tools needed:
-Seal Remover tool. I use Cornwell Tool #PU-206. It's $23.
-Two 12mm wrenches
-Piece of pipe the size of the pinion seal
-Ruler that measures in Millimeters
-24mm socket for pinion nut
-Flat head screw driver or punch (something to unstake a nut with)
-Big Phucking Hammer or Wimpy @ss Mallet (varies on personal preference)
-Pry bar
-White-Out or Paint marker (something that will show up well on metal)
-Impact gun and air compressor (highly recommended but not needed)
-6-pack of favorite beer or 1 can Lemon-Lime 4LOKO

Start by removing the 12mm bolts/nuts holding the driveshaft to the pinion flange... 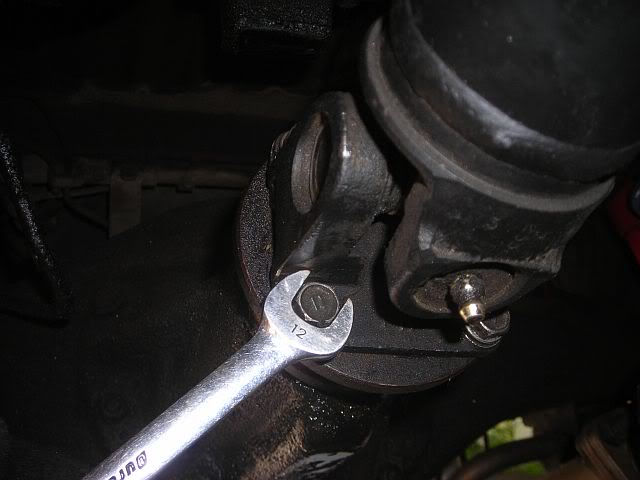 Then grab your pry bar and remove the driveshaft from the flange... 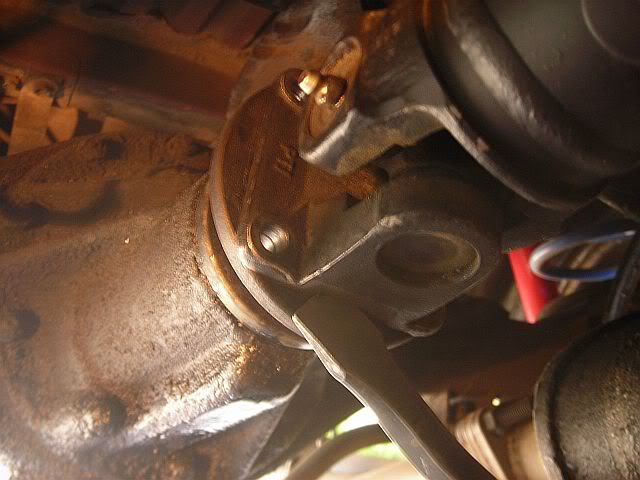 Grab some rope or in this case a shop rag, and tie up the driveshaft so that it is supported. You don't
want the driveshaft to just hang there un-supported. It's bad on the center support bearing if you still
have the OEM two-piece driveshaft. No need breaking more stuff on your corolla, so tie that sh!t up. 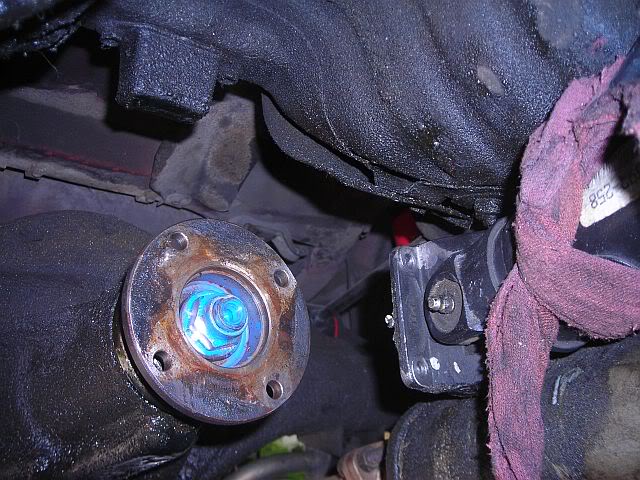 IMPORTANT PART!!!!
With the driveshaft removed, you can now see the pinion nut. Use your marker pen and make a
reference mark on the pinion and the pinion nut. You will need to use this later to set the pinion preload.
If you forget to do this you will be screwed and will have to take the whole diff apart and do it the lame
way. Don't forget! 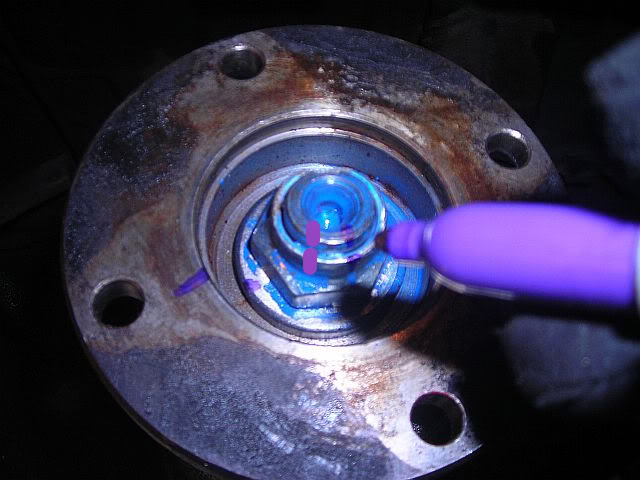 With the pinion location marked, unstake the nut with your screw driver and Big Phucking Hammer,
then take your 24mm socket and impact gun and take the pinion nut off. 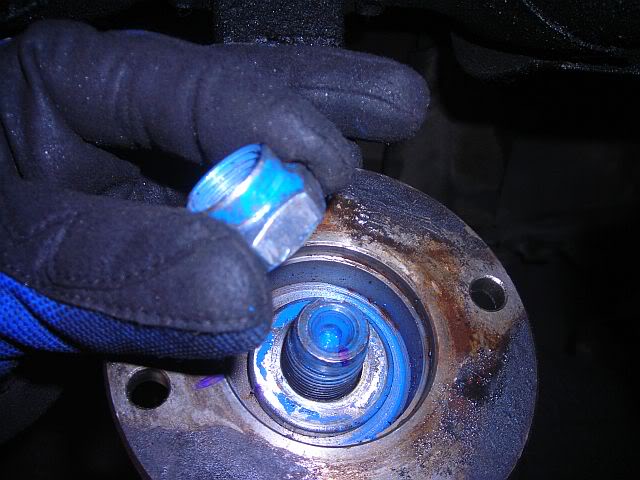 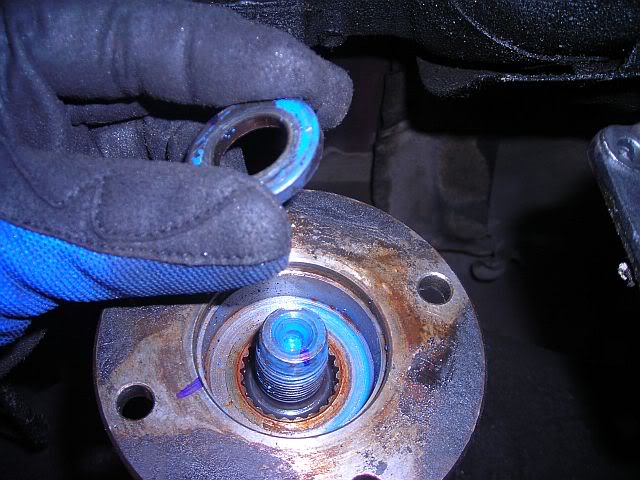 A couple of light hammer taps and the pinion flange will come off along with some diff fluid. Have
a drain pan ready to catch any falling oil unless you wanna BP disaster on your hands... 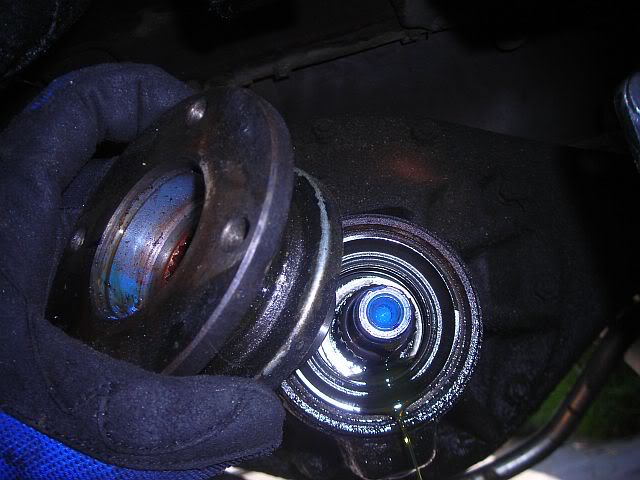 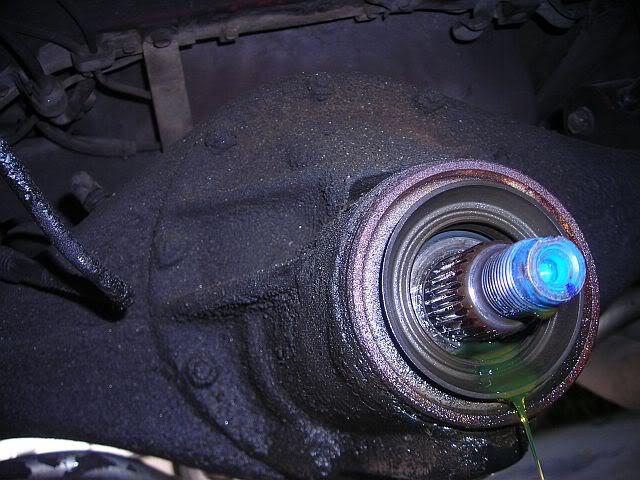 Take your puller and your hammer and tap the old seal out. Sometimes they are stuck in there good,
don't be shy. 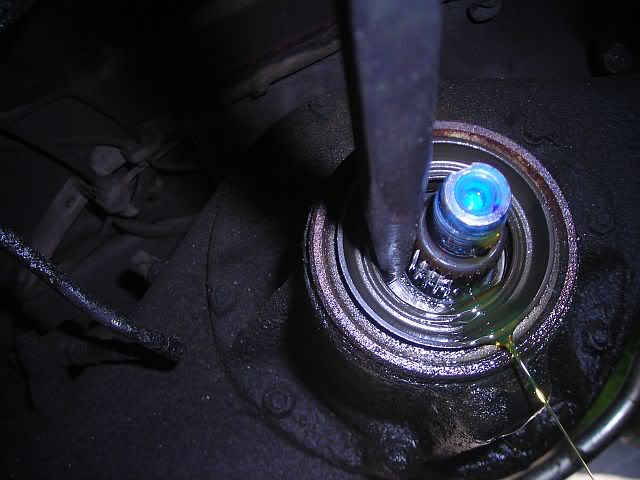 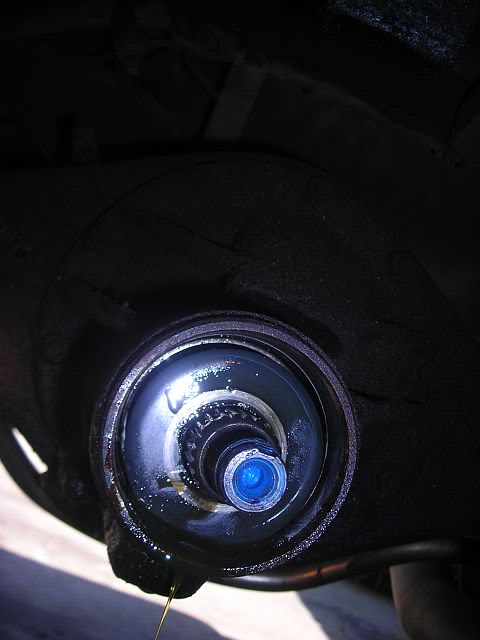 Begin to install your new seal. TAKE YOUR TIME USING LIGHT TAPS! Use your piece of pipe to make
the installation go smoother. The pipe should be the same diameter as the METAL PORTION of the
pinion seal, so when you tap the seal in with the pipe the pipe SHOULD NOT be crushing any portion
of rubber on the seal. Use light taps and evenly drive the seal in.

IMPORTANT NOTE!!!
The seal DOES NOT sit flush with the lip of the 3rd member housing, this picture below is of the seal
just barely in the housing, it needs to go in much deeper. It actually sits 4mm deep into the housing.
Now is when you take your ruler and measure the piece of pipe that you used to drive the seal in. You
can take your marker and make a ring that is 4mm from the end of the pipe to make things even easier.
With the ring marked on you pipe, you then simply drive the seal in until your 4mm marker ring is level
with the lip of the 3rd member housing, at that point you are 4mm deep into the housing. Check again
that your seal is evenly pushed into the housing and not crooked. 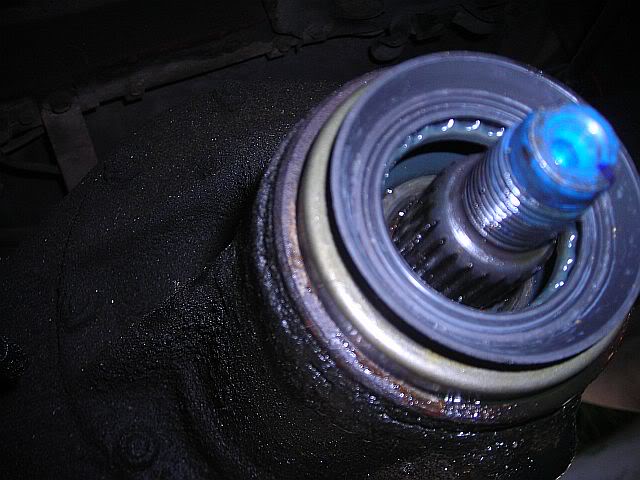 Begin to re-assemble the rear end again. Slide the pinion flange back on to the pinion and give it a
few light taps to ensure that it is in all the way. Install the washer and the pinion nut.

IMPORTANT NOTE!!!
Contrary to what any mechanic friend has told you, the pinion nut DOES NOT have a torque spec that
you tighten it down to with a click-type torque wrench. The pinion nut is tightened down and pinion
bearings squeezed together until when spun they measure 13in/lbs of resistance (new bearings w/ axles
out). This is where your reference mark you made on the pinion and pinion nut comes into play. When
installing the pinion nut, tighten the nut down until your reference marks line back up to the exact spot
they were before. Over-tightening past the mark or too loose before the mark and you run the risk of
damaging the pinion bearings and with time damaging the ring and pinion. So tighten the nut until the
marks line up, no more no less. Please feel free to re-read that because it is the most important step
of this DIY article.

NB: This DIY article kindly contributed (again) by HASportAE86. Hope you are doing well man
wherever you are

Thanks guys!!! Sure appreciate the info!!! Very good info there jondee86!! My respects to you!!! So now I know where to start!!!

This DIY ^^^^ is not my work, I just reposted it because it was relevant. It used
to be linked in the FAQ before the old forum stuff was allowed to slide into oblivion.
So much great useful information lost, and many of the original authors have moved
on to other interests. Sometimes you can get lucky and find the old posts floating in
the bowels of the interwebz (like the DIY post above) so that it can be reposted here.

But I'm afraid a lot of valuable info has been lost forever. Hopefully there are still
enough members with knowledge to share so that questions still get get answered

Users browsing this forum: No registered users and 10 guests