DIY: a quick outline on why and how to set pinion angle.

DIY: a quick outline on why and how to set pinion angle.


A few a general rule of thumb's when it comes to setting pinion angle:
1. You do NOT want the u-joints operating at 0 degrees! You want a 'working' u-joint angle of 1-3 degrees so the u-joints stay lubricated. (See links below.)

2. The pinion angle should be anywhere from parallel to the transmission/engine angle OR anywhere up to 4-6 degrees below it. The amount of angle below depends on your suspension, both type/design and soft/stiffness. Typically it will be something along these lines:

Leaf suspension:
Depending on power/suspension/setup = 2-6 degrees below


Don't believe the hype. Pinion angle has little to no effect on power or feel. In the old days it was considered important on drag cars with squat characteristics built into the rear suspension (and usually with leaf springs), as they try and line up the driveline under accel to get the 'most power' to the ground... and possibly to prevent from exploding their u-joints with extreme axle wrap.


Want to know more? There's a lot info in these links so I don't have to regurgitate everything else:
http://www2.dana.com/pdf/J3311-1-DSSP.pdf
Slightly older and some out of date info from me here:
http://forums.club4ag.com/zerothread?id=31679
http://www.hachiroku.net/forum...23559


The car does not have to be on level ground to do this. BUT the car does need the rear suspension loaded (weight of the car on the differential) to get the proper angle at ride height. I would recommend having the diff housing on jackstands and a jack at the 3rd member/pumkin to raise and lower the diff to 'settle' it after adjusting.


I've found when it comes to taking measurements don't use the usual angle gauges available at hardware stores, the scale/resolution is not even close to good enough. I also prefer NOT to use the angle gauges that measure at the u-joint caps, or a socket in the cap to place an angle gauge against to measure. Doing it this way is not accurate enough, as can be seen here:

I like removing the driveshaft for taking the actual measurements, as I prefer to get it directly from the output shaft/pinion flange like so: 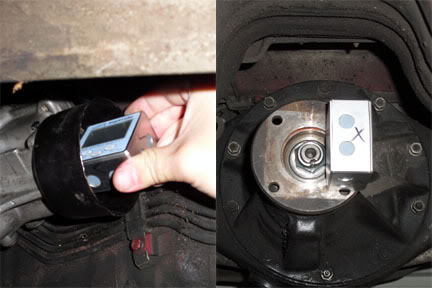 Note: if you have a 2-piece it's a little more complicated, as you also measure the angle at the flange between the front & rear halves.

Then you adjust your pinion angle, start it parallel and adjust downwards as necessary to eliminate noise/vibration when cruising. On the AE86 that usually requires adjustable length 4-link. So bust out your wrenches and lengthen/shorten the upper/lower arms as necessary to get your desired angle.

For reference, the driveline angle: 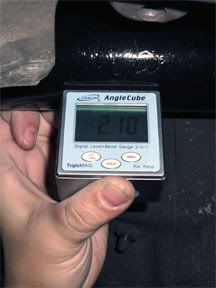 Remember where I mentioned above the recommended u-joint operating angle is 1-3 degrees? If you look at the numbers on mine it works out to .40-.45 degree's. Despite that fact, it's not a problem on the AE86 which has a compound angle driveline.

I took a quick measurement and found that the pinion itself is offset approximately 1 inch from the centerline of the car in the horizontal plane (assuming you've centered your differential if lowered). That offset works out to about 2.4 degree's in the horizontal plane, or 1.2 degree's each u-joint. That works out to about 1.3-1.4 degrees operating/working angle for the u-joint's and is pretty much right where you want it, as between 1-3 degree's is what you want.

Re: DIY: a quick outline on why and how to set pinion angle.

Re: DIY: a quick outline on why and how to set pinion angle.

I agree, pretty much the OG of DIY write-ups. It's a pain to access the old threads!

FYI, you can still look up the pics if you use a way-back machine.
Success guardian... Successsssssss..
Top

Users browsing this forum: No registered users and 5 guests