i had a question if anyone here in the past two years has any experience with the Powered by max coilovers?

i read their forums and many others as i could find with the pictures not being expired. are they dependable? is it safe to use even after welding up the rear top strut mount with that cup shaped item?

I am pretty new to the ae86 suspension combo as i am more accustomed to the Schassis suspensions.


Or am i better off just running a greddy type S setup? because it runs spring and shock separate? i see in this thread people saying Greddy has "missed the ball" but i haven't experienced enough to know what i should be looking for?

I know the T3 front setup is decent from what i have read so far and it is far cheaper to just make your own, I have priced up HTS short stroke shocks for the rear and still can't find where to buy the TRD drop springs ( a link would be helpful ). How low does the body go? I plan on running 15x8 and would like keep it functional while looking good with a decent drop. Just like how my S14 is.


I saw a pic on the PBM site of the D2 coilovers that mount to the shock top and it blew right threw it, just want to make sure if its reinforced with that cup thing PBM supplies that it won't do that?

anyone with a few years of experience on these are welcome to chime in thanks!!!
for those curious on what the images look like here they are on PBM
http://www.partsshopmax.com/e107_plugins/forum/forum_viewtopic.php?7155.40
Top

I don't have any tieup with these guys, but they tend to know their sh*t when
it comes to AE86 suspension...
http://shop.battlegarage-rs.com/products/fortune-auto-coilovers-500-series?variant=1082908833 Pbm is interesting, but their focus seems to be drift cars. Plus the kit isn't cheap and doesn't come with spindles. Further, it doesn't seem that there is a way to cup weld a spindle on as it should be because the strut housing is too wide at the base.

Edit: Stance looks cool but I have no idea how they perform. They've got needle bearing front top hats, monotube shocks, inverted front insert, and complete inverted rear coilover. I'm not sure if the valving is digressive or linear. By default they come with the obligatory unbearable 8/6k spring rates.

Fortune auto looks great aside from the default 8/6k rates. Hey whatever sells right? At least they have digressive valving so they should be more tolerable, and less harsh than linear valved shocks with the same spring rates. If you live in thw US it's a bonus because they are too.

On paper I still think shockworks sounds the best. Monotube shocks (inverted front) with 6/4k spring rates. The best thing is they've properly tuned the valving for our cars (and spring rates) using math, shock dyno, and road tuning to get the most grip and soak up the bumps. The only problem is they're probably the most expensive kit out there, and they're located half way across the Earth in Australia.

I still like the diy appriach best, although it can be harder to get the ride height dialed in.
Top

My vote is with Stance. They did a lot of hands-on development with the AE86 and their newest inverted coilovers. I've talked with people that have run them and they do exactly what they should. They actually come with 8k front and 4k rear but they're also fully willing to consult on a custom setup for different spring rates so they can valve the shocks accordingly.

I've had experience with PBM coilovers and they're pretty harsh on the street.
Top

^Do you have a link by chance? I'm genuinely curious.

Their site must be out of date because they still list the 8/6k rates and non inverted rear. (However, I did see a pic of the inverted rear coilovers in boosted86's build thread.) I also did a google search but can't find anything but the old setup.
Top

Gripgoose808 wrote:I saw a pic on the PBM site of the D2 coilovers that mount to the shock top and
it blew right threw it, just want to make sure if its reinforced with that cup thing
PBM supplies that it won't do that?


Having a read of that thread that you linked, I think it is safe to say that the shock
punched out the top of the mounting because someone had fcuked with it. You can see
where a big slot was cut in one side (and probably in the other side also) to let the top
of the shock fit all the way up inside the cup. That just put too much load on the
remaining metal and it gave up the fight. None the less, it is fair to say that the car
was not designed for the full rear suspension load to be carried by the shock mountings,
and some reinforcement would be a good idea.

Looking at the MAX solution, they do not really reinforce the mounting point. A hole is
cut in the top of the mount, and the outer holding ring for the pillow ball is welded in.
What looks like a reinforcing cup is just the factory cup, but there is a run of weld on
the seam on one side. That cup seam would be better welded all the way round.

When there are several similar products that you can choose from, you need to look
at what is important for YOU. If you want to be able to drive your car on the street,
you may find the standard "drifter" rates of 8/6kg are a bit harsh. So the ability to
order up a set of coilovers with custom (lower) rates and appropriate valving will be
important. If you would prefer not to have to cut or weld to fit your new suspension,
then a set with the OEM rear setup (springs separate from shocks) will be important.

In terms of hardware, as a minimum you should be looking for a front setup that has
height adjustment separate from spring preload, and a radial bearing to prevent spring
windup and ease the steering effort. Make sure that what you buy can be serviced or
repaired/replaced in case of accidental damage. And if you can, try and get a ride in
a car that has the setup you want before you buy,

Worth considering that 6kg non coilover rear springs are working inboard of the rear dampers thus the spring rate is effectively lower than using a 6kg coilover type so 6kg coilover is going to put a fair load into the body shell.
Personally I think that with 2.25" springs front or rear you are on hiding to nothing and the larger diameter spring is better in many respects. The only thing that a typical adjustable coilover design achieves is the ability to correctly corner weight the car, something that very few people appear to do. The coilover type that has an independent height adjustment is the only one I would use.
Top

Deuce Cam wrote:^Do you have a link by chance? I'm genuinely curious.

Their site must be out of date because they still list the 8/6k rates and non inverted rear. (However, I did see a pic of the inverted rear coilovers in boosted86's build thread.) I also did a google search but can't find anything but the old setup.

They're pretty bad with updating info on these coilovers. I had to get those rates from emails between FRSport and Stance. Here's a few pictures I've come across of them: 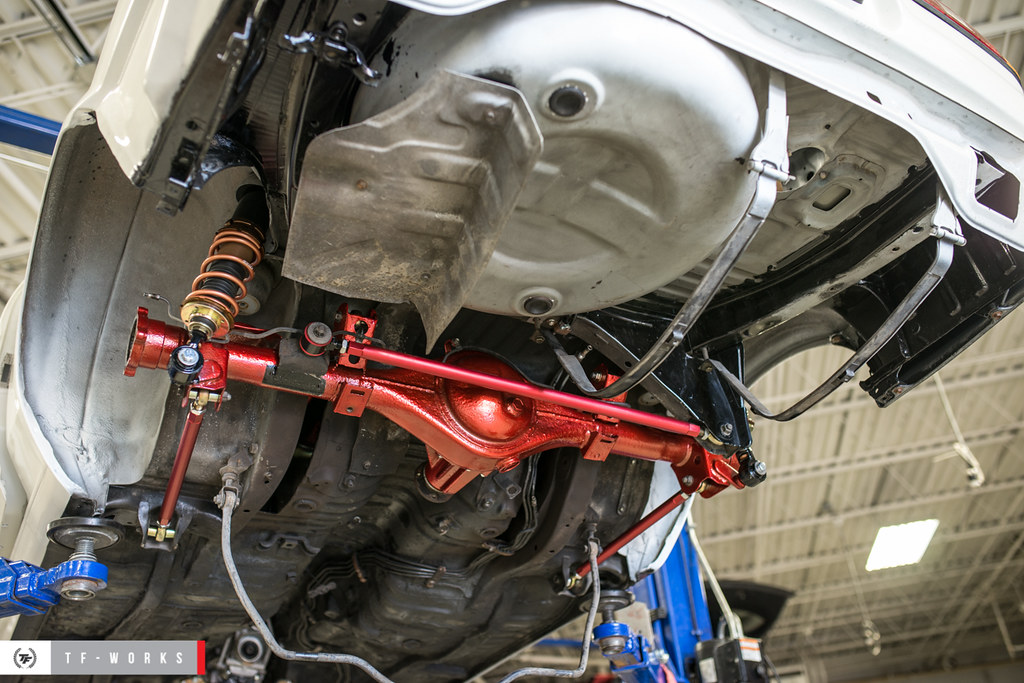 Because.... everyone loves pictures What sort of driving do you want to do with the car, and what's your budget? Having driven on all of those setups listed above (besides Fortune Auto) I found the Shockworks setup best, the damping is just worlds in front of everything else for ride comfort and outright grip.

They are more expensive, especially for you guys but were worth it to me as anything else felt like a compromise in comparison.
Top
Post Reply
10 posts • Page 1 of 1