Two different kinds of charm homie! Its like, there's girls out there you would introduce to your parents, and then there's girls you wouldn't, which occasionally are more fun sometimes. 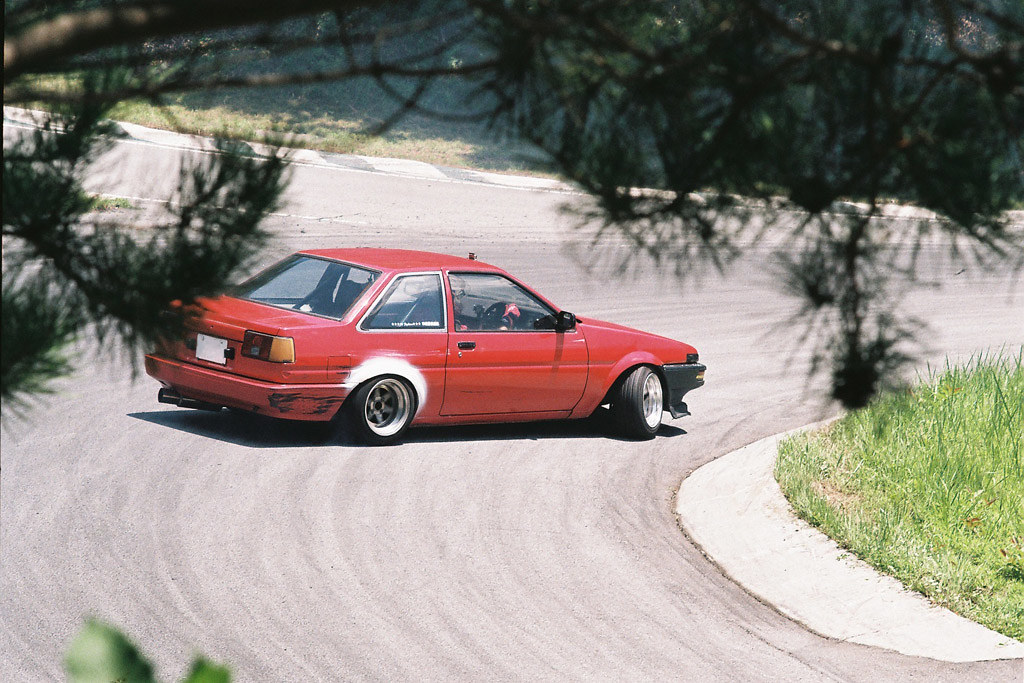 Or this other random I found on the internet forever ago 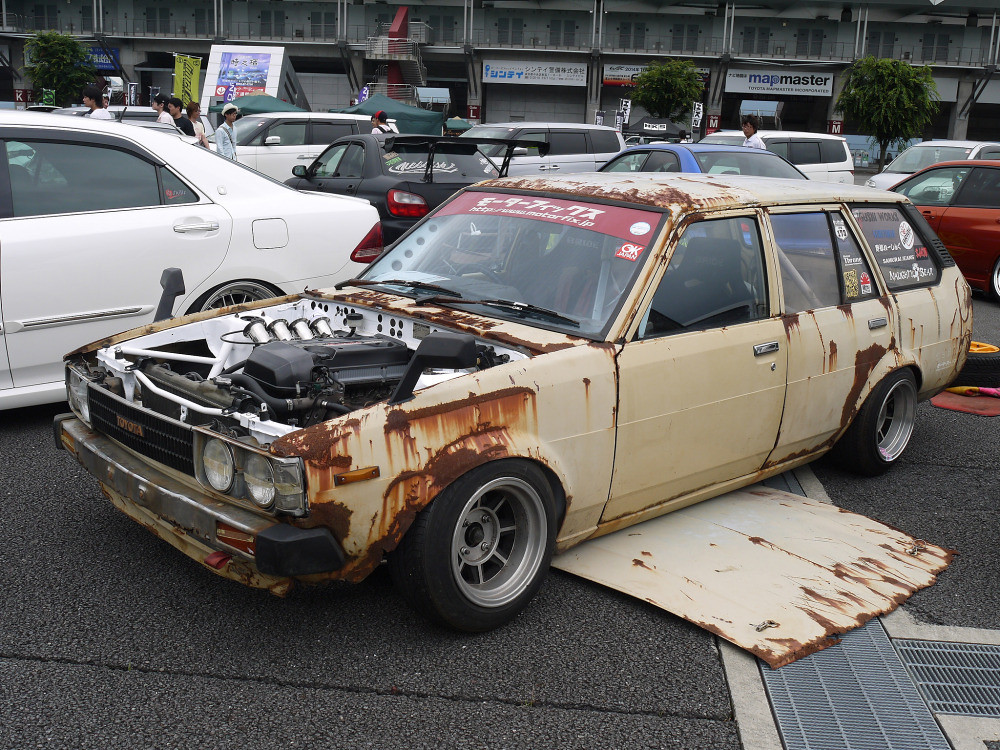 Lol besides I have to replace my core supports. My upper rad support is completely crushed in, and spending any money on an alignment is a waste of time, so I need body work. Plus they have to be painted or else they will rust

You drive the car yet with those parts? Im curious about what appears to be the bgrs rear 4.5k springs - should be a decent match for the trd shocks.

Fwiw I tried those shocks with swift 6k springs and trd 5.1k previously. I felt the car was noticeably under damped with the 6k springs. The 5.1k's were a better match, but still not great, imo.
Top

Nah, it got dropped on the tow over and the alignment will be stupid bad until it goes in the body shop.
Success guardian... Successsssssss..
Top

So a little update.

Axles came back and look great. They buffed out the scorch marks on the passenger side axle. Still strange why it's there..

Will get pics up soon.

Right now calipers are at the Powder shop getting rebuilt in Evo Gray (grey for Jondee). I purchased an entire OEM rebuild kit, grease, and brake tool from Toyo. Was gonna rebuild them, but it's just not something I can do right now.

Pads will be Hawk street performance.

Once everything gets installed I'll take pics. After that it's alignment time.
Success guardian... Successsssssss..
Top

Thank god I found the bolts. Apparently I packed them in the box with the front willwooods lol.

And thanks to acepanda for helping me with rattle springs

Moving on to the backs and re-installing the rear axles. Gonna be a lot of finessing since there are a bunch of gaskets, and the e-brake cable needs to be re-connected.
Success guardian... Successsssssss..
Top

Looking good, I really like that color choice for the calipers.
Top

Dude those calipers look sick. Any thought on wheel choice later on down the road? Or are you going to stick with the Konig Rewinds?

I feel like you'd gotta get some wheels that are a little more open to show that stuff off. TE37s would look good

I was gonna throw the rewinds in a volcano, but my new powder coater gave me a stupid cheap deal on doing the rewinds in satin black. Mounting was free too with valve stems and weights.

They are wrapped in my favorite budget togue tire. BF Good Sport Comp 2 summers. They melt under takumi driving, and you can't really rotate, but they are awesome. First time I'm running them on an FR car though.

By the way, does anyone know where I can get flat center caps that fit the diameter of the center hole on the rewinds? The stock caps look gay as hell

who is your powder coat guy? and how much was it?
Can pm me if yu like.
Top

But pricing powder coating is weird. I had a lot of stuff done at the same time, so It's cheaper.
Success guardian... Successsssssss..
Top

Thanks! It really is. He's independent though, and it's only him in the shop.. So wait times can be rough. But worth it if you're patient.

Update: Both front and real calipers, Hawk HPS pads, and Phase 2 rotors are installed and everything is torqued and ready to go for the most part. The front pads on the inside (the ones which are pushed by the caliper piston), refused to go in. It took a lot of finessing. I found the culprit was the middle, long, anti-rattle spring. It did not like it at all! The rears were annoying because 1, the driver's side rotor refused to go on. I had to dremel a good amount of material around the outer hub as it was too thick, and a little on the ID of the rotor, which was weird since the pass. side went on fine

; and 2, I PC'd the dust shield, and it's just annoying to match the paper gasket up properly. I also had to install minus a gasket (on the driver's side behind the dustshield), as I used FPG grey on that particular gasket.

It is optional to use gasket sealer, but I wouldn't recommend it. When you do this, you'll destroy the gasket anytime you remove the shield or axles. If you don't, you'll get a couple more remove and replace, and it will seal just the same TBH.

I also didn't mention that after the debautry with the Willwood rears, I ruined my e-brake cables. Fortunately CabeToyota had some new ones (and still do), so I ordered and installed them.

The only thing holding up my 100% brake job is that the rear hard lines are being a bitch. Especially the driver's rear. I'm going to have to bend the hardlines which is something I really hate doing, but I refuse to not properly mount the lines with circlips ("E-clips" as Home Depot calls), and U-clips.

I actually ran out and am missing the circlips for the front, and hardware stores only sell standard sizes, so I'll have to figure out the metric size, as Toyo doesn't sell these anymore.
Success guardian... Successsssssss..
Top

So a little update.

Car is now at a full service shop getting an alignment, then figuring out a starting issue I was having (I gave up on it, just got burned out).

The rear is all aligned. Brakes and clutch have been flushed. Not sure If I mentioned it, but I put a new Aisin clutch master, slave, and SS line (I think from Technafit).

The front end alignment is next. Then they'll have to align that rack properly. I couldn't get the tensioner nut to get the proper torque, so I'm hoping they fare better. It's a finicky process. Too much torque and the steering is too stiff, too little and it's dangerous.

I was also having a binding issue at the strut towers when the coils were raised up high enough. I'm hoping T3's needle bearing highats didn't fail me.

But the good news is, it'll be driveable soon. I was going through my thread and I can't believe it's been a year. And I still haven't done tranny or engine work!
Success guardian... Successsssssss..
Top

Welcome to the never ending 86 project lol. At least you will be able to drive it soon!
Top

CloudStrife wrote:I was also having a binding issue at the strut towers when the coils were raised up high enough. I'm hoping T3's needle bearing highats didn't fail me.

I'm pretty sure those random "pong" noises are just the suspension settling in. I get those noises sometimes and I don't have anything binding.
Top

Nah, mine was more grinding, evident of binding just from feel and type of sound (isn't it fun to describe sounds on the internet).

A little update. She runs and drives but runs pretty rough. The coilovers are not height matched on the front since I get tire rub with my messed up fender. I probably won't get to do any real test until I go in for some body work.

I'm having a last brake issue right now. Once I get that sorted I'll report back.
Success guardian... Successsssssss..
Top

It's got something wrong air wise. Not sure if it's Exhaust or Intake. Brakes have too much air too drive around.

It was doing this weird thing when I went and drove it where it would die at idle or if I stopped.

It's also leaking coolant and oil.

That is precisely why I swapped my engine. There is a reason why this shirt exists https://technotoytuning.com/toyota/ae86 ... ghts-shirt
I'm sure you will get it figured out. Just takes time and money constantly being thrown at it. lol
Top

So I was trying to drive the car to my buddy's shop to bleed the brakes and adjust the ebrake cable.

On the way there (it's a 15 minute drive). I had almost no power. I barely made it up a FL hill. I figured it was the alt. and my pipe after the header was broken and hanging.

I noticed the oil pressure gauge was acting wonky, but I figured it was just the sender unit or the gauge since only like 25% of gauge readings worked..

She kept wanting to die like my alternator was shot, and sometimes did. Finally she cut off and a bunch of white smoke steam was pouring from the engine bay. Was like something out of a movie. I don't think the temp sensor ever read hot. And even though the reservoir was boiling for about 5 minutes after being shut off, it still only registered as Normal Operating Temp

She would start and run for a little and die. I thought I blew a HG and we towed it to my buddy's shop.

We took the plugs out and they looked totally fine. I tried to start her up one more time and she idled for a few seconds then died.

We ended up getting a ratchet on the crank nut, and trying to turn the bottom end by hand. It would not move right, so we tried left. It only barely turned with maximum force.

She wouldn't start at all after that last start up. Between the crank not being able to turn, the oil being very dark and funny smelling (like burnt), and the fact the oil pressure wasn't registering, leads me to believe that the bottom end is seized..

Can I get you're guys' thoughts on this?
Success guardian... Successsssssss..
Top

CloudStrife wrote:Bump for a feeling of total loss and depression lol.

Wish I could give you some advice....if you couldn't turn the crank...that def is not good. Guessing it was in Neutral while attempted turning....just shootin some ideas man. Timing belt isnt broke and jamming up the crank cog?
Top

CloudStrife wrote:Bump for a feeling of total loss and depression lol.

I'm sorry man. It seems hopeless right now but you'll get her running smoothly soon enough and it will all be worth it. Just hang in there. Maybe sleep on it and you'll have a better idea of how to approach it in the morning.
KAZATO - 85 GTS Coupe
Top

Users browsing this forum: No registered users and 3 guests