by nyberrg
As expected my engine build did not last long. It's time to salvage what's possible. More details coming tomorrow but for now I have one question.

Is it possible to use a big port (ae86) head on a 7-rib (smallport, ae92) block? The block has what looks like an external oil return. The internal returns seem to match up too though.

nyberrg wrote:As expected my engine build did not last long. It's time to salvage what's possible. More details coming tomorrow but for now I have one question.

Is it possible to use a big port (ae86) head on a 7-rib (smallport, ae92) block? The block has what looks like an external oil return. The internal returns seem to match up too though.

yes you can use a largeport head on a smallport block.

As far as the drain - you could add one to the largeport head(not easy) and then connect them, OR you can cap off the smallport block pipe by using NAPA part# 660-1695 ( a 3/4" coolant cap) and a hose clamp.

I meassured the crank and the rod journals seem to be out of spec (I found the numbers to be 41.985-42.000 somewhere on the site?) by about 0.05 mm if I read the micrometer correctly. I'll check on this again tonight and meassure my other 42-crank that I ran in the bigport block before the earlier build.

If one is bad I think the other one should be good. It worked earlier at least...

I'll block off the external oil return and just run the bigport returns.

As for oil: My engine was probably on the cusp of proper failure, although I haven't really found any metalshavings or missing pieces from the old bearings and such. Should be safe to use the same oilpump right?

Found some plastigauge to meassure bearing tolerance for when the assembly happens. Aiming to get this together by the 27th as I was planning a trip. But yeah, guess we'll see.

by nyberrg
In my hunt for bearings I got some from the local Toyota dealer. When they showed up it turned out it was only ONE of each. One crank bearing, one rod bearing. Doing the math of how much a full set would cost me I noped out.

With Flo's being closed for vacation I don't know where to find bearings in the EU, and shipping times are horrendous right now. I managed to find a guy who had a set laying around but I can't make out if they are the right size... Anyone?

by oldeskewltoy
just a thought.......

you might want to have a professional machine shop check, and set your bearing clearances. They have the equipment needed to set them.

by nyberrg
Out on deep waters with measurements and honing equipment. 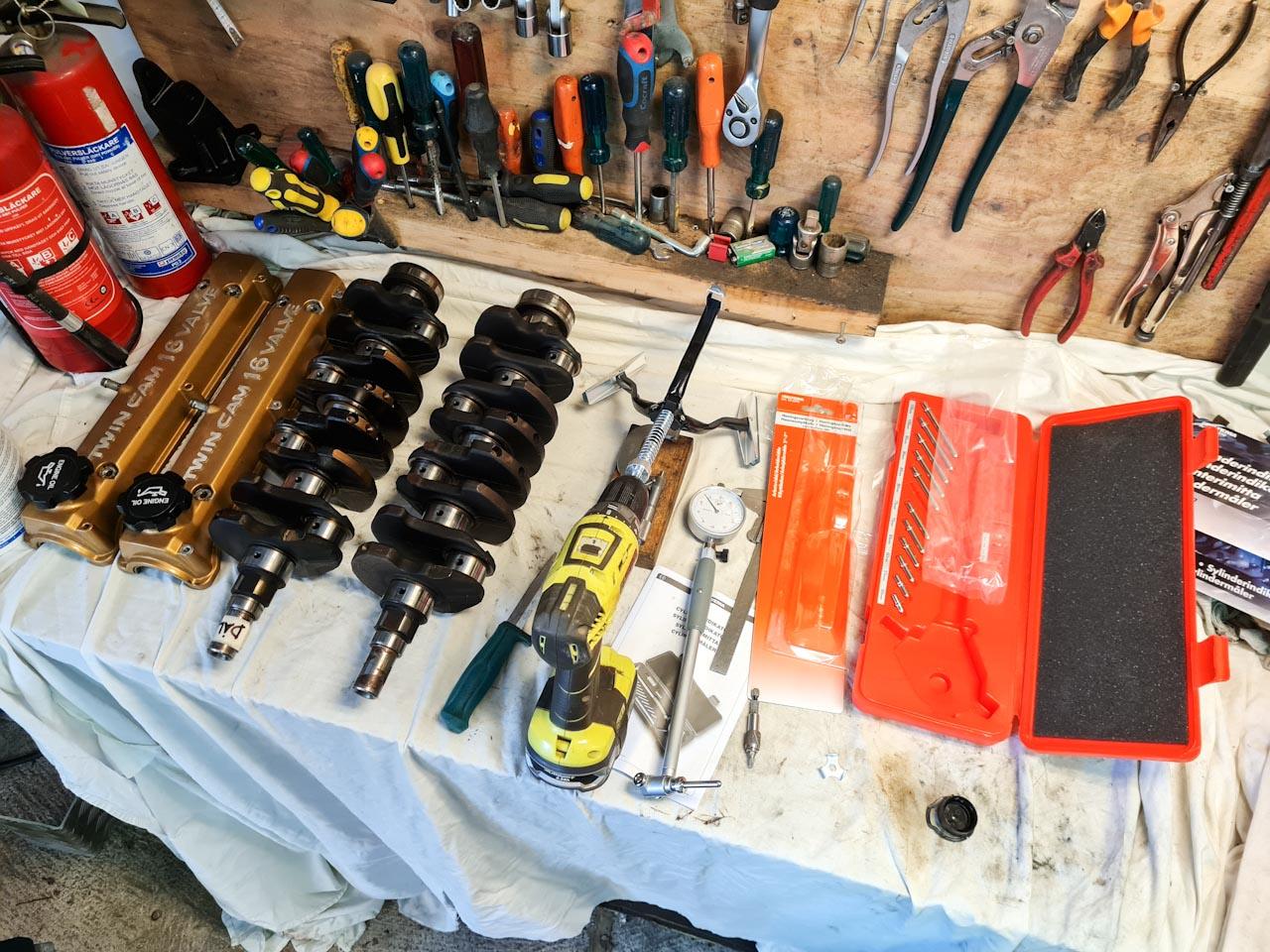 Things look to be in order with the 7-rib block. One crank is good to go. Checked the pistons quickly and they seem to be ok. I will do the proper calculations on tolerances to the cylinders next.

oldeskewltoy wrote:As you mentioned you believe you were out of spec..........

Still had one crank that was good to go. There was a distinct difference between the good and the bad.

Checked the main and rod bearing clearances as the Toyota repair manual said and it was good. 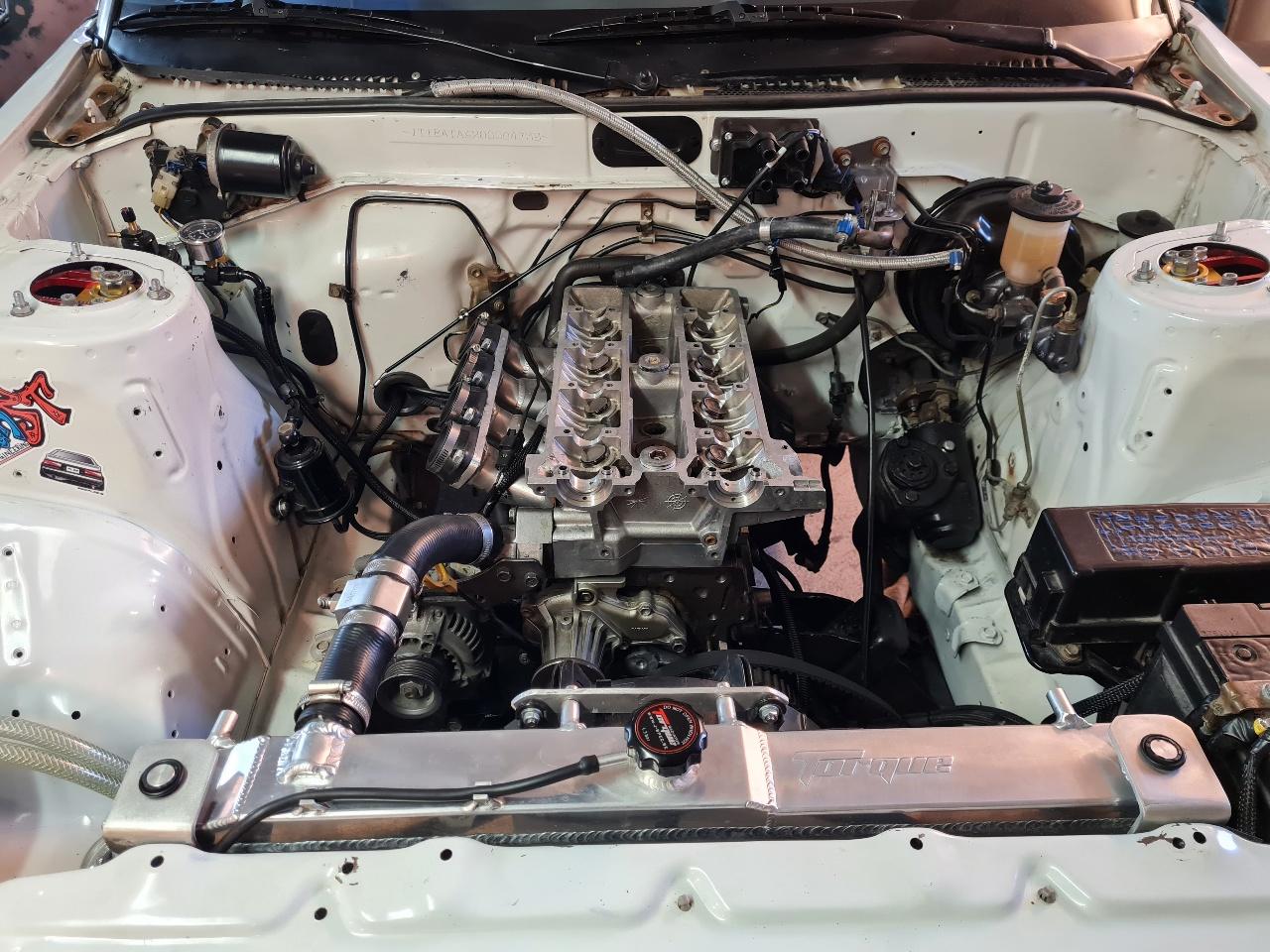 Deadline is in eight days

by nyberrg
I had a bunch of issues with things outside of the engine. But I made my deadline and went on my trip. The new engine performs good so far. Sounds nice and runs great... until it didn't.

One of the rubber flanges I mount my carbs in decided to break the night before causing the engine to run on three cylinder. A temporary fix was implemented using a coolant hose. When I was almost back from the trip the car started running on three cylinders again so I figured it was the fix that had done all it could. Turns out it's another broken flange. The rubber in them seems to be quite ****.